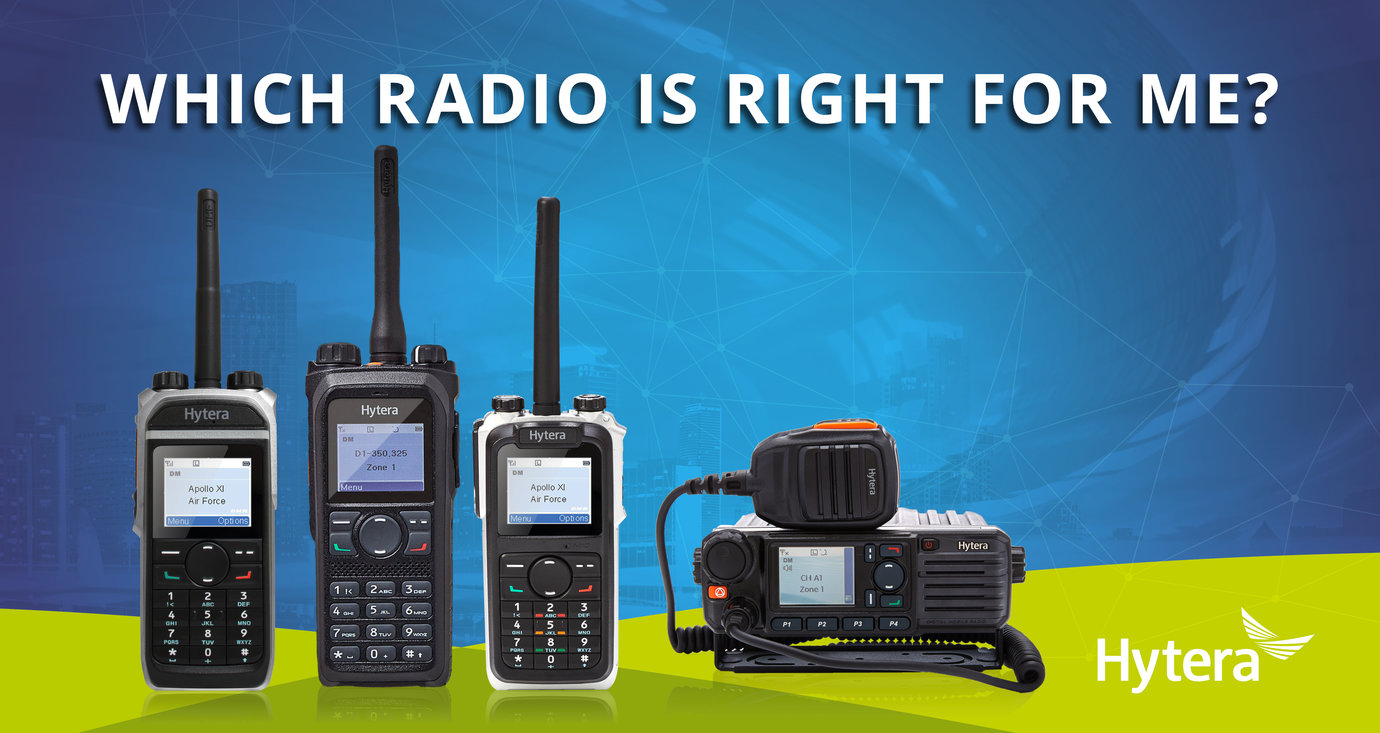 The PD6 Series marks something of a step-change in capability and feature set within the Hytera range. The radios are high quality devices delivering superior voice clarity, additional features and enhanced encryption, as well as supporting use across DMR Tiers II and III, pseudo and extended pseudo trunking, ideal for larger user groups. The radios are IP67 rated making them highly dust and water resistant, perfect for operating in even the harshest environments.

An emergency button, priority interrupt and lone worker features are provided as standard, but with the PD605(G) variant you can also get GPS for tracking, positioning and man down features.

The man down feature is triggered if the radio has been tilted past a certain angle, perhaps if the user has fallen over or is unconscious or injured. The alarm will then be triggered after a warning is issued to the user.

The radio is very versatile and will connect with telemetry, integrate into telephony systems and can be used across multiple sites with Hytera XPT or DMR Tier III trunking systems.

A variety of encryption standards are on offer from basic (10, 32 & 64 character keys) to 40 bit enhanced encryption, up to advanced encryption (Hytera or DMRA 128 bits and 256bits AES) - available via chargeable licence file. Bluetooth to support wireless connectivity to audio devices is also available as an option, although you will need an external adapter accessory.

The PD7 Series arrive with a similar build quality and feature set as the PD6 Series, but offers a wider range of operating frequencies and a more traditional form factor. Again, the radios are extremely rugged with an IP67 rating.

The PD705LT is the first in the range with no display or keypad. It also strips out a lot of the advanced features such as compatibility with trunking, in-favour of being a simple cost-effective, rugged handset with emergency mode. It is distinguishable via the grey push-to-talk (PTT) button on the side, whereas the PD705 has an orange PTT and full-set of DMR functionality. The PD705(G) is the option if you want GPS and Man Down features in addition to the standard emergency button, priority interrupt and lone worker features of the PD705.

The PD7 Series is also the home of Hytera’s ‘intrinsically safe’ radios. These radios adhere to the two EU ATEX directives, which describe what equipment can be used in an environment with an explosive atmosphere, as well as conforming to the IECEx (International Electrotechnical Commission Ex) standards system for certification relating to equipment for use in explosive atmospheres.

The radios are MILSTD-810 C/D/E/F/G certified for shock and vibration and IP67 rated for dust and water protection and have a battery life of 17 hours in digital mode. There are four radios: the PD715Ex (no display or keypad); the PD795Ex (with display and full keypad); PD715IS (no display or keypad); and PD795IS (with display and full keypad). The radios are available in the VHF (136-174MHz) and UHF1 (400-470MHz) frequencies.

The two Ex radios conform to the ‘ib’ classification meaning they are certified for use in Intrinsically Safe Zones 1 and 2 areas only. The two IS radios conform to the even more stringent ‘ia’ certification, which means the radio circuit has three protective measures, allowing for the occurrence of two faults during operation without risking user safety.

The ‘ia’ certification enables the devices to be safely used in Intrinsically Safe Zones 0, 1 and 2 areas. Zone 0 (or 20) is defined as: an area with very high levels of hazardous product present continuously; Zone 1 (or 21) as one with high levels present intermittently; and Zone 2 (or 22) as one with normal levels present abnormally.

All the radios come with GPS location features for positioning and tracking as standard, along with the Man Down feature, as well as the other standard safety features. Silicone encapsulated technology helps prevent the internal circuits from being damaged by intrusive liquid, inflammable dust and explosive gases

Both the radio and the battery are encapsulated to ensure that all internal connections are protected and sealed off from dangerous explosive gases and dust particles. Fail-safe design features mean that batteries or accessories with a lower level of protection will automatically trigger an alarm, whilst a patented latch ensures the battery remains securely attached even when knocked or dropped.

The PD985 and PD985(G) GPS and Man Down variant (both with display and full keypad) are Hytera’s top of the range hand held devices offering a multitude of advanced features for use in any environment, including top rated IP68 certification against dust and water intrusion. It operates in the UHF (350-527MHz) and VHF (136-174Mhz) frequencies.

The radio is capable of full duplex calling on a conventional Tier II and DMR Tier III system allowing you to send and receive communications simultaneously to enable a conversation, rather than just the usual one-way or half duplex transmission. The device can be used as a single frequency repeater to improve coverage across your site (with chargeable licence).

The PD985 has a massive 19-hour battery life. With integral Bluetooth 4.0 for a full range of audio connectivity and programming. Voice recording is also available allowing you to record your transmission and call data for future analysis, although this does require a micro SD card and a separate application for playback, chargeable licence.

The X1e and X1p are Hytera’s premium covert DMR devices offering advanced features such as GPS, man down and Bluetooth as standard. Super slim and lightweight, the X series are design to slip in to a pocket to operate discreetly with a broad variety of specialist covert accessories, from wireless earpieces to incognito PTT.

Available with display and keypad (X1p) or without (X1e), the handsets have been cleverly designed to offer dual microphones, emergency button and reversed PTT to allow the user to wear the device face down for covert applications.

Rugged and reliable, rated IP67, both devices are dust and waterproof, ideal for operating in harsh environments, also capable of being utilised on Tier III systems.

Hytera has three mobile radios in its portfolio: the MD655 compact; the MD785 professional; and the MD785 full duplex.

The MD655 is a compact (165 × 46 × 140mm), lightweight (1,050g), IP54 rated mobile radio suitable for operation on a desktop or mounted in a vehicle. It is entirely operated via a handheld microphone with three line LCD display screen and three programmable buttons. An optional adapter and wireless handheld microphone is available for a completely cable free solution if required.

The high-resolution LCD screen offers a clear display, even under difficult light conditions. The large keyboard and seven ergonomic programmable keys are designed to facilitate efficient and productive communication. Bluetooth audio features are available via an external adapter.

Finally, the MD785 Full Duplex (plus GPS variant) offers the same features as above but with the addition of simultaneous two-way conversation in both DMR Tier II and Tier III systems.

For more details on any of the above radios please see the detailed specifications on our Hytera website, or contact a local authorised Hytera partner.