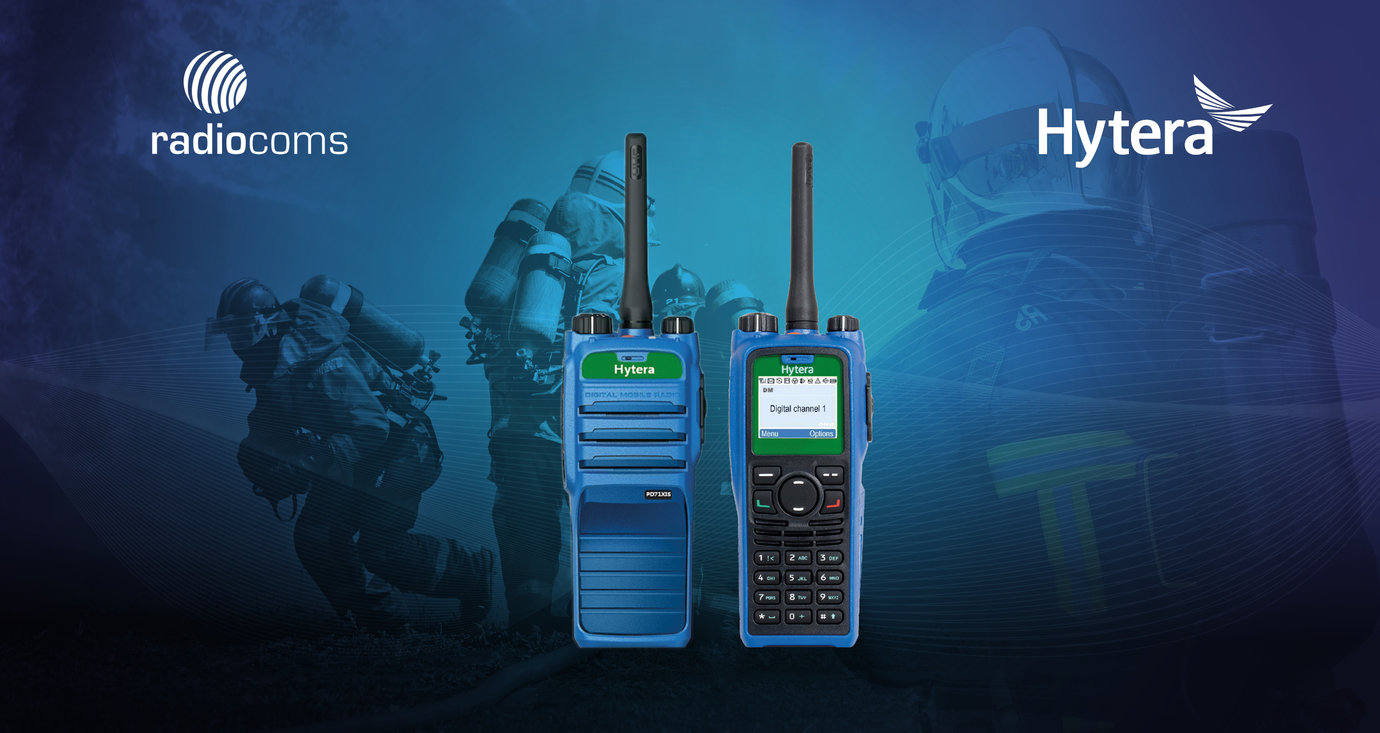 The specifications and management of radio communications equipment used on the fireground are generally governed by a set of national regulatory and operational requirements. Each country will issue guidance for fire brigades, while private fire crews at airports, ports, oil and gas and petrochemical installations will have also have to conform to fire safety guidelines pertaining to their industries.

For example, guidance for the procurement and use of radio equipment for Fire & Rescue Services (FRS) in the UK is set out by the Home Office in conjunction with the National Fire Chiefs Council (NFCC). The guidance, which was reviewed and updated in 2017, details what kind of communications equipment can be used and lists the frequencies and channel plans for digital and analogue radio use.

At the launch of the new guidance, the NFCC commented that effective fireground communications “are crucial to the work of fire and rescue services in resolving incidents and ensuring firefighter safety, particularly between sectors and when breathing apparatus (BA) crews are deployed”. The NFCC added that the “intraoperability” of communications between services at “cross-border and major incidents” can also “be critical” to effective operations.

UK FRSs deploy a mix of both TETRA and Digital Mobile Radios (DMR) digital radios and some analogue radios. This mix might seem a little surprising at first, but Simon Bingham, senior account manager at Radiocoms Systems, which has supplied radio equipment to almost all of the UK’s Fire & Rescue Services over many years, explains why this is.

“What happens in a typical fireground set up is that once the 999 call is made and the incident is booked into the system, the call goes to the fire station and the appropriate fire appliances and crews are dispatched.The fire appliances are equipped with TETRA mobile radios, which use the UK’s nationwide Airwave emergency services communications network. “On the way to the fire or incident, the firefighters use the Airwave TETRA network to talk to each other and to the dispatcher in the command and control centre and to collect information on the incident on the way to the fire,” explains Simon.

However, once the firefighters are at the scene the fire, they then rely on their hand portable two-way radios. “Some of these radios may still be analogue, but most FRSs have now upgraded to digital. But they don’t tend to use Airwave. Instead, they will use analogue or DMR radios,” says Simon.

The fireground radios are therefore split into two sections. “The main communications between the officer in charge of the incident and the fire brigade’s command and control centre, and any other commanders from other fire brigades, police and ambulance service, is done over the Airwave TETRA network. Typically the officer in charge will stand next to a fire appliance and use a remote speaker microphone attached to the TETRA mobile radio inside the cab,” says Simon.

The operational firefighters on the fireground will use their analogue or DMR hand portable radios to communicate amongst themselves using ‘simplex’ direct mode operation (DMO). “UK FRSs still have a huge demand for traditional simplex radio services,” points out Simon.

He explains that this is generally because the communications between the operational fire crews are confined to the task in hand and there is no need for them to be broadcast over the main Airwave network. If any important information is communicated over the TETRA Airwave network that operational firemen need to know, it can be passed on to them by the officer in charge.

“In a typical house fire you’ll have a team outside damping down the fire, spraying water and so on, and breathing apparatus (BA) teams working in pairs, who are counted in and out of the building by the entry control officer. They use two separate radio channels: a BA channel and an incident channel. The National Operational Guidance (NOG) for the fire service provides a standardised channel plan,” says Simon.

Fire and rescue services pay the communications regulator Ofcom for a licence to use a set of frequencies in the 450-470 MHz band (UHF 2 band). There are six main Home Office approved Fire Service Channels - four simplex and two duplex. These comprise: two general fireground channels; two incident command channels; and two breathing apparatus (BA) channels. Other channels are also available for a widespread incident and for working with other agencies.

It is not always possible to cover the entire fireground using simplex mode communications. Some fire services therefore install repeaters in shopping centres, tall buildings and tunnels to provide wider coverage when needed. However, portable, fast-deployable repeater solutions are often more useful to extend coverage into tall buildings, tunnels or basement areas. For example, Hytera’s RD965 digital/analogue outdoor repeater can be carried in a backpack, temporarily mounted on a wall or pole, or installed on a fire appliance.

“The RD965 could be mounted on a fire appliance and powered up when the vehicle sets off,” observe Simon. “It has selectable channels and provides wider coverage via the vehicle’s antenna. So, if you have a fire in an eight-storey building and you lose your simplex comms, you can get a bigger coverage field by deploying the repeater.” An even simpler alternative is provided by a feature on the Hytera PD985 DMR hand portable radio. The PD985 can increase coverage by using the handset to retransmit communications across a site via its single frequency repeater mode function - a feature unique to Hytera.

“If you have 10 firefighters running down a stair into a tunnel and disappearing round the bend, you could lose contact with that team. But if you have a PD985 you can use it to relay the signal back down the tunnel. Or you could drop it at a certain point and it will relay along the tunnel or up and down floors,” says Simon.

Unsurprisingly, firefighters want dependable, rugged, lightweight and, of course, waterproof radios able to withstand high temperatures. They require devices with a long battery life and which provide clear audio. They also want terminals that are interoperable with other manufacturers’ products - something most DMR manufacturers, including Hytera, enable. Simplicity and ease of use are a must, as no fireman wants to struggle to operate a radio in all the noise, confusion and poor visibility associated with a fire.

Hytera offers a range of DMR hand portables that can operate in either analogue or digital mode. If some firemen still have analogue radios, those with DMR terminals can switch them to analogue mode and everyone can communicate.

All Hytera models in the PD600 series and above are IP67-certified or higher against dust and water intrusion.They also feature Hytera’s noise cancelling technology to provide clear audio in noisy environments and they all have a long battery life. All the radios meet the newly issued Home Office and NFCC radio channel plan from 2017. Hytera radios are complemented by a range of accessories including wired and wireless headsets and different types of remote speaker microphones, as well as belt clips and other types of attachments.

Any workplace containing or dealing with dangerous substances is subject to the Dangerous Substances and Explosive Atmospheres Regulations of 2002 (DSEAR), which imposes an obligation on employers to make a suitable and sufficient assessment of the risks to their employees.

DSEAR defines an explosive atmosphere as one where ‘a mixture of dangerous substances with air under atmospheric conditions in the form of gases, vapours, mist or dust which, after ignition has occurred, combustion spreads to the entire unburned mixture’.

For UK fire and rescue services, the recommended standard for general applications where an explosive atmosphere is likely to occur in normal operation is Zone 1, or Zone 21 in the case of combustible dusts. Intrinsically Safe Zone 1, or 21, is defined as an area with high levels of hazardous product present intermittently. The UK regulations state that ‘equipment for use in places in which explosive atmospheres may occur must be selected based on the requirements set out in the Equipment and Protective Systems Intended for Use in Potentially Explosive Atmospheres Regulations 1996 (EPS) unless the risk assessment finds otherwise’.

To meet this need Hytera provides ATEX intrinsically safe radios in the shape of the PD715Ex and PD795Ex (with full keypad and display unit). These are certified for use in Intrinsically Safe Zone 1 and 21, as well as Zone 2 (and 22). The PD715IS and PD795IS are also certified for use in Intrinsically Safe Zone 0 (or 20) where high levels of hazardous product are present continuously. They are the only DMR radios certified to meet the stringent conditions for operation in Zone 0.

The radios also conform to the ‘ia’ certification, meaning the radio circuit has three protective measures, allowing for the occurence of two faults during operation without risking the user’s safety.

Simon Bingham points out that workplaces such as onshore oil and gas installations and petrochemical plants are unlikely to be allowed to operate without their own fire brigades, who should be equipped with ATEX radios. Ports, airports and manufacturing plants with fuel installations or storage of other hazardous products on site are likely to follow suit.

Steve Rosewell, senior key partner manager at Hytera UK, points out that often these kinds of facilities will install repeaters around the site to boost coverage, as ATEX radios operate at a lower power output compared with normal hand portable radios and so have a more limited range.

Equipment and applications for Fire & Rescue Services are governed by regulations, which can restrict fire brigades from investing in some technologies and applications. They also tend to be conservative when it comes to adopting some of the newer digital applications and features now available from two-way radio manufacturers. However, Radiocom’s Simon Bingham reports that private fire brigades are much more enthusiastic about adopting applications such as GPS-based location apps, Man Down, Lone Worker and Emergency Button alerts and unified communications platforms to link two-way radios with telephony systems and mobile phone networks, for example.

Steve adds that there is definitely a good case to be made for deploying unified comms platforms and says other markets are interested in modern applications such as the Hytera SmartOne unified communications platform and the Hytera SmartDispatch system. However, to date fire brigades in the UK have been slow to deploy the digital apps that are now available with modern DMR systems.

“The thing with apps is that although they provide a lot of facility they also add another layer of complexity, which makes FRS crews reluctant to use them,” explains Steve. “You have got to put your radio into Lone Worker mode or set up your Man Down alert and ensure you have someone monitoring for alerts who is able to coordinate a response. You need to have very strict processes and procedures in place,” he notes.

However, he points out that many private organisations, including most manufacturing plants, now operate with smaller workforces due to increased automation, so they depend a lot on lone workers. As such they are much keener to use apps like Man Down and Lone Worker alerts on their radios and to use GPS to track and locate their workers. This is partly for practical efficiency and productivity reasons and partly to meet worker safety obligations under the Health & Safety Regulations. “The fire brigade don’t use GPS, but private sites do need the ability to track their staff, especially in petrochemical plants,” says Steve.

Hytera’s range of terminals, repeaters and applications is ideally suited to fulfilling the communication needs of modern fire brigades, both national and private. Our authorised Hytera dealers have built up years of expertise in designing and installing radio communications for fires services and can provide great deal of practical advice when it comes to choosing fireground communications.