Třinecké Železárny used to have an analog radio system for many years but it reached the end of its life cycle and its production was discontinued. TŽ management considered various options of possible substitution very carefully. Finally, the offer of company Master IT succeeded in the process of selecting a suitable solution. They proposed to replace the radio network with the digital communication system Hytera according to DMR Tier III standard. Two radio models were chosen because of their easy migration to the new solution: The portable radio Hytera PD785 in the number of 1,000 pieces and automotive radio Hytera MD785 in the number of 120 pieces. These radios meet the requirements of the user both in terms of their utility value and durability in conditions of heavy industry use.

The company requirements for radio network substitution were very specific. The new radio network obviously had to cover factory premises reliably for portable radio communication. The delivered Hytera DMR Tier III solution secures the connection in the challenging conditions of steel production, keeping the same or even better quality compared to the original system, and in the same configuration with a single base station. The system has the same capacity as the original system with the possibility of extension to double. Thanks to TDMA digital technology, it is able to manage with half the number of frequency duplex pairs. An enterprise of Třinecké Železárny size with a large number of employees, who rely on the radio daily, requires a smooth migration from the old to the new solution. The new Hytera communication system therefore had to be constructed simultaneously with the original radio network. Until the new communication system had undergone a proper testing and the new radio stations had been handed to individual departments, the two systems were operating side by side. The radio configuration, its control and functions, the number of talk groups and the numbering plan had to copy the currently used radio network as much as possible to make the migration as easy as possible for users. The latest version of Hytera trunked system allows you to set a free numbering plan which meant that the numbers of radios and talk groups were set according to the original system.

A relatively specific function is the traffic monitoring in several speech groups. This function is used by workers who collaborate with several groups of users simultaneously or coordinate their activities. This feature, called "scanning group", also expanded the range of possibilities that professional solutions Hytera DMR Tier III offers and is used in Třinecké Železárny. Another important user requirement was the speed of group call arrangement, which is important for immediate workers´ communication when managing manufacturing operations and logistics. Hytera DMR Tier III achieves very good results in this direction. In case of operation through one base station, the time necessary is approximately 100 ms for larger networks with MSO this time is up to 400 ms. The natural advantage of digital systems is a very good call quality and clarity, which is especially important in noisy environment of heavy industry. Digital radios have about 40% longer battery life per a charge within the same capacity of the accumulator used compared to analog ones. 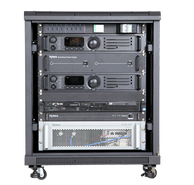