Down House’s 7-year-old analogue system was failing to deliver coverage, clarity and reliability. The site presented a number of challenges, with thick walls throughout the building, as well as a large acreage.

“Some of the original foundations of the building go back to the 16th century. There is an attic, basements and 33 acres of land across the estate. There’s a large area to cover and we need a clear radio signal”.
BRYONY ATKINS - SITE MANAGE

Staff struggled to keep in contact with their operations manager, with communications repeatedly dropping out. This was a particular problem in the site’s over-flow car park, causing visitor management and safety issues.

The bulky handsets were a further concern – the staff found them heavy and awkward to carry throughout the day. The battery life was also poor, frequently depleting after just half a day.

After considering a number of options, the team chose new Hytera handsets supplied by Dover based radio company Smye-Rumsby.

The PD505 Hytera handset was demoed to the team in the summer of 2016, and left for staff to test in day-to-day operations.

The digital handheld radio is lightweight at only 260grams, IP54 rated against dust and water ingress, and offers the latest noise cancellation technology.

The handsets also use lithium-ion battery technology, giving the Down House team a superior talk time per charge, easily outlasting a full shift.

Hytera’s radios quickly helped the Down House team to improve operations and manage visitor flow in the house. The staff noticed enhanced call clarity, particularly in the more remote areas of the building and surrounding estate.

The team have found the radios discreet, lightweight and comfortable to carry throughout the day. Thanks to their intuitive design, the handsets were found to be simple to operate and are used by all Down House staff, who range in age from 16 to 77.

Staff have made daily use of features such as personal calling to help with the safety of colleagues working in remote areas of the site. What’s more they no longer lose communication due to either coverage or depleted batteries.

“It makes sure that my team is safe and that they feel safe; that they can communicate with me in an area on their own. The battery life is excellent so I have no worries that someone’s battery will run out halfway through the day.”

Thanks to the new handsets, Down House now have a reliable communication system that supports the day to day running of their busy operation, whilst offering the Site Manager and her staff peace of mind.

“The radios help us to make sure the operation runs smoothly, that we’re giving the best customer service to our visitors and that we can keep in contact over the 33 acres of land that we have here”. 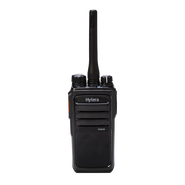