The local authorities met with leading French radio communications business Sysoco, who recommended the Hytera DMR radio and application. The choice was obvious - the Hytera network proposed ticked all the boxes in terms of performance and technology, and crucially met the requirements of new legislation which required the municipalities to create a Communal Crisis Plan.

One of the key imperatives behind the project was this legislation. The towns worked together to create the Plan, which required a more robust, reliable communications network, able to handle high volumes of calls as quickly as possible, at any time of day. The plan also required a central command unit which would be able to centralise these calls and coordinate a response from the emergency services.

Crucially, the fundamentals had to be respected. Teams needed to communicate efficiently not just with each other but with the control stations, surveillance centres, and even with external communications networks, regardless of location.

Instant access, 24/7, 7 days a week was essential, with the option of making Group Calls as well as private calls in emergency situations a necessity. Equally, security teams required the ability to make distress calls via an emergency button.

It was also deemed important that local police officers could communicate directly with other local emergency services - fire service, ambulance, etc. The radio infrastructure had to meet this requirement either by allowing officers to access the public telephone network, or mobile network through their device.

The Urban Surveillance Centre (USC) is an integral part of the towns' local safety and security policy. The centre is on the front line in the fight against crime, but also helps manage local services. With a network of CCTV cameras across the area, the centre helps guarantee the security of people and property, monitoring activity and putting calls through to the appropriate services in the event of an incident.

The USC acts as a central point for calls from the field, notably from police officers. It operates as an interface between these services and emergency services, i.e. National Police, Fire Services, Ambulance, etc.

Since a law was introduced aimed at modernising local security, local mayors have developed a Communal Crisis Plan to guarantee the protection of people and property in the event of a crisis. More than 10,000 French towns and villages have taken part. They require the ability to receive alerts and handle them as quickly as possible, at any time. The Plan also requires the implementation of a Central Command Unit which would assume responsibility for coordinating response from the emergency services.

It was underlined early on that mobile networks could become a target - and may perhaps even be unusable. Users had previously noted technical problems with mobile phones - failing systems, broken chargers, failing batteries, and noted that networks were failing for two main reasons:

1. network saturation due to the number of calls from those involved or their families

2. partial or total destruction of certain lines or terminals being put out of service

Thanks to Hytera, the radio communication networks stay operational, even in a crisis situation.

Indeed, the absence of Group Call functionality severely limits the capability of mobile phones. The Communal Crisis Plan lays out the need to move away from mobile and to find reliable alternatives such as Digital two-way radio networks. Moreover, it was important that within the network, officers and agents could be located at all times in the field so that emergency services could respond as quickly as possible in the event of a distress call.

Coverage and audio quality are fundamental to the success of the new system, but new digital technologies have also been adopted (Lone Worker, GPS, text messaging, etc.). This requires a network capable of handling this data.

Arcachon, Biarritz, Pau and Auch took the decision to implement Hytera's SmartDispatch system, which fulfils all the requirements of the Communal Crisis Plan.

With SmartDispatch, the local authorities are able to geo-locate agents and vehicles in real time, create efficiencies in their movements depending on requirements, and transmit service orders by voice or SMS.

SmartDispatch radio dispatchers can both keep a record of daily events that happen across the network, take control of the radio communications system in case of user error or injury, activate or deactivate handsets in case of theft, and receive or transmit data from mobile phones. 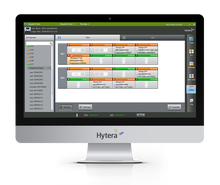